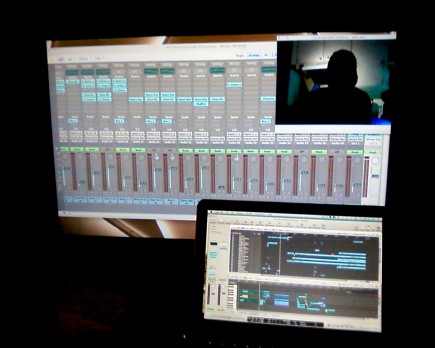 Clips from scenes within Q-lab:

Sound Design for this children’s story included in the realized production of Ultimate Audio Book. Music composition by Todd Reid.

Realized sound design as well as music composition for Ylla, a chapter from Ray Bradbury’s Martian Chronicles.  Ylla, a Martian woman trapped in an unromantic marriage, dreams of the coming astronauts through telepathy. Her husband, though he pretends to deny the reality of the dreams, becomes bitterly jealous, sensing his wife’s inchoate romantic feelings for one of the astronauts. He kills the two-man expedition, astronauts Nathaniel York and one simply called Bert, as soon as they arrive.

An Overheard Comment on the Tube (Fall 2011, Wimbledon University of the Arts, London)

This is a 36 minute radio documentary of the London Underground public transportation system. It consists of sounds of the tube, bits of overheard conversation, and interviews of Londoners who use the the tube fairly regularly. This is not a documentation of historical facts or current quantitative information, but generally(and hopefully objectively) captures the mood of the people and different aspects of the system during the time it was recorded.

A more detailed description and list of scenarios can be found here.

This is a remix done awhile back for an Indaba Music remix contest featuring Radiolab episodes. This remix of A War We Need, focuses on microscopic environments contrasted by snapshots of the oceans that contain them. There are also moments of exaggerated human warfare for juxtaposition and humor.

A recorded audio drama of Le Guin’s, An Die Musik. My partner Nathan Prouty and I did the full sound design and dialogue recording. I produced the orchestrated music that pops up in places and accompanies the narrators speech at the end. Also contains work of various classical composers.

Are You Afraid Of What Could Be

Short sound environment focused around a frozen stream in the woods. The mood and point of observance shift throughout.